Andre Neverson has been on the run for 14 years.

Neverson, who lived at Never Dirty, Morvant, is wanted for a double murder since 2002, and despite their best efforts, the United States Marshal Service has  had no luck. The relatives of the victims believe they will get no justice. Despite a US $25,000 reward, Neverson remains missing. The US Marshals have increased the tempo to find Neverson.

Neverson is believed to have fled the United States and may be residing in Barbados or other Caribbean islands.

Neverson allegedly murdered his sister by shooting her in the head and stomach on July 8, 2002.  The next day, he allegedly abducted a former girlfriend. She was found dead two days later with a mortal head wound.

At the time of both murders, Neverson was on parole in the State of New York for attempted murder in the second degree, assault in the first degree and criminal possession of a firearm.

In November 2002, Neverson, armed with a handgun, allegedly entered the home of another ex-girlfriend in an attempt to visit his daughter.  The woman’s brother interrupted the unannounced visit, and Neverson fled with no further incident. The New York City Police Department searched the area for the felon, but never located him.

Neverson has been classified as one of the U.S. Marshals Service’s “15 Most Wanted” Fugitives.

He is also wanted by the U. S. Department of Homeland Security Bureau of Immigration and Customs Enforcement, Division of Parole for New York State and the NYPD.

He has a violent criminal history with a pronounced pattern of violence toward women.  Neverson speaks several languages and is known to always carry a firearm.  He usually keeps his head shaved, but has been known to wear wigs to disguise himself.  Investigators believe that Neverson is computer savvy.

Due to his past criminal history and the nature of his alleged crimes, Neverson is considered armed and dangerous.  Neverson has ties to Barbados, Trinidad and Tobago, Jamaica, Bahamas, Grenada, St. Vincent and Canada.

Neverson who uses other aliases, has reportedly slipped in Trinidad on several occasions undetected. 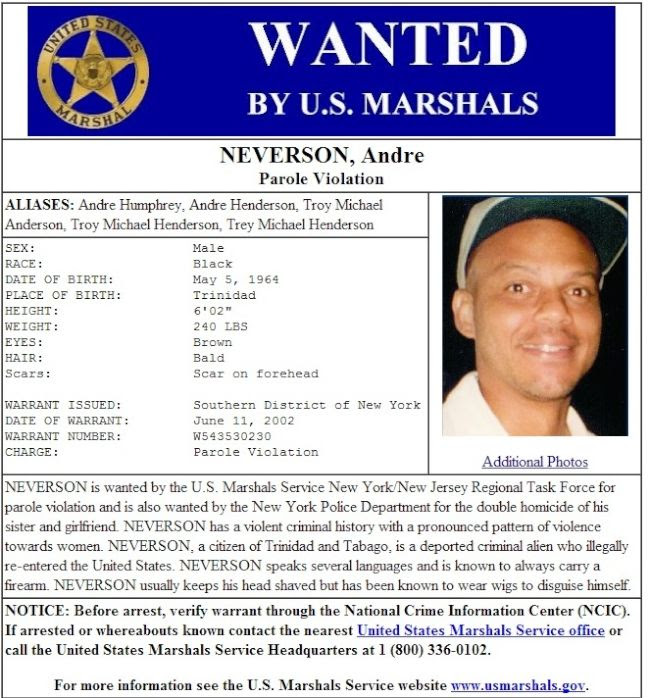