Andrea Parra
0
Spread the word
On Monday, Minister of Works and Transport, Rohan Sinanan, said there was no shortage of inspection stickers for vehicles five years and older.
On Wednesday, the Transport Commissioner Wayne Richards posted a notice on the front glass at the Licensing Officer, Port-of-Spain, that inspection stickers were not available.
The next day, Richards made a 360-degree turn and said there were thousands of stickers available. So which is the truth?
What caused Richards to change his mind 24 hours later? Did Sinanan come down hard on Richards? What is the true story?
Well, Richards has assured the public that there is no shortage of inspection stickers.
Richards found time to show the media rolls of inspection stickers which are available.
The notice on the front glass was plastered on social media, which infuriated the public, many of whom complained that they had to wait for long periods to be attended to at Licensing Offices.
Richards stated, “We have thousands and thousands of stickers for both commercial and private vehicles.”
He said on Wednesday, due to technical problems experienced with a machine, stickers could not be printed, but they had in stock. He said the machine has been repaired.
Told that the notice was misleading and gave the impression that there were no stickers available, Richards said, “Well, that is how some people read it. But we have sufficient stickers available, I can assure you.”
Drivers can be fined $5,000 for not having their vehicles inspected.
On Wednesday, Richards threatened to shut down any inspection station if they are found guilty of demanding an additional $300 inspection fee on vehicle owners when they go to collect their inspection stickers.
This was after he received a complaint from someone who had their vehicle inspected not too long ago at a station for which they paid $300, but did not collect an inspection sticker due to a scarcity.
However, when the driver went to the station to collect his sticker he was told he must pay $300 again to have the vehicle re-inspected which Richards said was wrong. 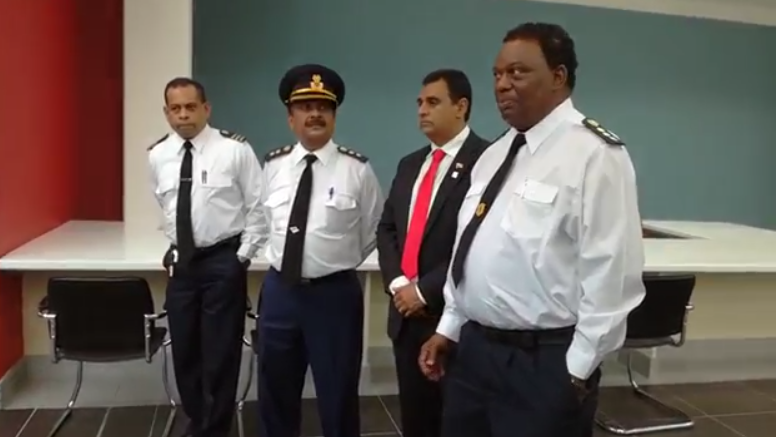