The former Minister says by asking primarily young aspiring home owners to invest in such a bond as a savings scheme for purchasing a house in the future, spells disaster unless such a policy is embedded in law.

He added, “This proposal, like the declaration by Dr Rowley three months ago, to spend $9 billion in housing, is another pie in the sky madcap plan that will not get off the ground. This requires very serious policy considerations, strategic planning and legislative change.”

Moonilal said the proposal raises serious policy questions for example, the legal framework for refunding contributions, and if a contributor, for whatever reason, no longer needed a home but his or her money was already used in the construction of houses.

He continued, “We may well look to the Jamaican experience with a National Housing Trust to obtain a model for statutory intervention in this manner. The very role of the Housing Development Corporation (HDC) will then be reconsidered.”

Moonilal suggested government publish a proper policy document on such a bond scheme and engage in public consultations, although he rationalised, “with 12 months left for the Rowley government before an election year, this appears hopeless.”

Rowley broached the idea of the saving bonds within the HDC during a key handing over ceremony in Point Fortin to some 71 families, last week.

He said discussion is ongoing with Finance Minister Colm Imbert and he is hoping for a successful conclusion.

Moonilal said the houses in Point Fortin, for which keys were handed out, were constructed during the Patrick Manning administration and that none of the “lofty” housing measures detailed in Rowley’s election manifesto has been undertaken.

He said this contrasted radically with the record number of housing construction and distribution of the Kamla Persad-Bissessar administration, including the unprecedented handing out of houses to 100 families each week.

He said the critical need for public housing has reached historic levels, but this PNM administration has failed to house a single family as a result of its own construction initiatives.

To add insult to injury, he said government has discarded the land for the landless program of the People’s Partnership which had targeted the distribution of 20,000 lots to low-income applicants over a two-year period. 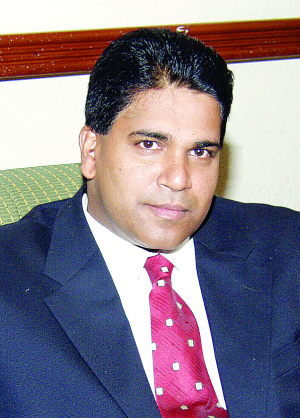 Breaking News
8 years ago he talked about court-martial …”TODAY, TREASON IS THE WORD”
HDC, PNM