Andrea Parra
0
Spread the word
Surprise, surprise!
Minister of Works and Transport, Rohan Sinanan, is disappointed with the Board of the Port Authority.
Well, Rohan, your Government got rid of the Super Fast Galicia because of politics, and now the fruits of that decision are affecting thousands of people who use the sea bridge.
Because the PP Government acquired the Galicia, your Government chose to send it packing so you can bring in your own boat. Since the Galicia left, the sea bridge has collapsed and this could signal the collapse of your Government if nothing is done quickly.
On Saturday, Sinanan said he was disappointed with the Port Authority over its handling of matters relating to the passenger vessels, TT Spirit and TT Express, both of which are out of service.
The TT Spirit was expected to undergo sea trial days ago but this was delayed while plans were still in the making for the TT Express to be taken to drydock for repairs. The Cabo Star is the only available vessel to shuttle passengers to Tobago.
Sinanan said although he was told that the TT Spirit would have resumed operations on the sea bridge, this still has not materialized.
He added, “Let me put it this way, I have been disappointed several times with the dates that they have given to me so I will not want to pronounce on anything until they can confirm to me that they have gotten the required certificates and the boat is ready to roll.”
Sinanan said as line minister for the Port Authority, he could not lose focus.
He stated, “The thing about it, I am very disappointed but I do have a responsibility as the minister so I cannot afford to lose faith. We are all disappointed with what is happening at the port and someone will be held accountable at the end of the day.” Who Minister?
Sinanan said he has requested a full audit on the dry docking of the TT Express and once someone has to be held accountable they will be.
“At the end of the day, a full report will be handed in (on the two vessels) and if it is the minister (who is to blame), then so be it. If it is management at the port, what has to happen will happen.”
Sinanan said he learned that the vessel simply required a part.
He added, “That part has extended to another part and another part.

The last information that I have heard is that it went on sea trial yesterday. And there is something that still needs to be corrected.

“They have worked on it last night and they are expecting to go on sea trial today again.”
Sinanan declined making any statements regarding when the vessel would return to the sea bridge “because I have been wrong on several occasions based on the information given to me by the port authority and I will only make a statement when I see the boat in the water with the certificates in hand.” 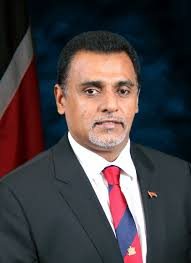