Kamla speaks out …COUNTRY IN CRISIS

Andrea Parra
0
Spread the word
Last Monday, the Opposition United National Congress resumed its Monday Night Forum at the Preysal Government School.
Below are some of the points raised by UNC Political Leader and Leader of the Opposition, Kamla Persad-Bissessar in her presentation:

“Your MPs and Senators have been working assiduously in a Parliament that is being blockaded and trampled upon, with the movement to wipe out the voices of the Opposition.

There are many things we would like to say in the Parliament but we cannot because of the very strong hand of a disciplinarian Speaker or President of the Senate.

There are issues that affect every citizen in Trinidad and Tobago – the rampage and escalation in crime, the total collapse of the economy and jobs, and healthcare.

People cannot afford food, but we are reading reports of tonnes of rice paddy rotting at an NFM mill.

In every area in which the PNM is in charge, we have reached crisis proportions; we are a nation being plunged into an abyss, and the only hope is the light from the rising sun.

It is most offensive, when a Prime Minister of a country, when the economy is collapsing, when the crime situation is out of control, when people are losing jobs every day, no medication in the hospitals – will take his time to write a letter to the editor to say “Opposition fake news” about a lobbyist. Can you imagine?

There are some bills that are coming that are really frightening. The Bill to do away with juries which is coming in the Senate tomorrow, and the Bill which is already in the House about abolishing Preliminary Inquiries.

In all my reading, nowhere in the world would you hear about powers being taken away from a Magistrate – a judicial officer – and given to the Director of Public Prosecution (DPP).

That is fracturing the Constitution, it is ripping it apart and I will not stand for that in the Parliament.

We are witnessing now an Attorney General who believes that through subterfuge he can come to the Parliament, remove the words that the Bill needs a special majority and all is well with that.

Mr. Attorney General I warn you – the road you are going down is an exceedingly dangerous road and we will not be led by you into the kind of dictatorship and tyranny that you are taking this country.

For the first time we have an Attorney General who should be impeached; he should be removed.

He is in Law, the guardian of the Constitution, and should look after the public interest and all this gentleman is doing is ripping apart the rights of the citizens of this country.

I want to warn the AG – the day you pass that Bill without us; we will take you to every courthouse from here right up to the Privy Council.

It must be noted, that this PNM government, having boasted of a legislative agenda – he said between September 2015 and September 2017 he would bring 46 pieces of legislation. You hear fake news? That is fake news. When you check it, the number of Acts that the PNM passed and were assented to in the 17 months – 13. Under the People’s Partnership Government which I led, we passed 28 Acts in the same timeframe.

Out of those 13 that were passed, only two dealt with the fight against crime and the justice system. Out of those, you know how many dealt with finance? They are about squeezing every last cent out of you. Out of the 13 they passed, 8 were dealing with finance and taxes. Under our government, out of the 28 we passed in the 17 months only 5 were finance bills.

On the Bail Bill and Anti-gang Bill, we put a sunset clause in for review, and they brought it back, and the Attorney General said a “big event” was going to take place if we don’t pass it – fake news again – if the Opposition does not support this, thousands of criminals would be coming out of the prisons on bail. Never happened. But his colleague in the Parliament last week, the Minister of National Security made a very disturbing statement which I want to correct.

Minister Dillon said in Parliament that because the Opposition did not support the Bail Amendment Bills, 1,474 inmates of the prison were released on bail. You want fake news? That is fake news.

Next day the headline is “UNC to blame for crime” because criminals coming out of jail because we did not pass the law. I intend to file on Wednesday a privileges matter against Minister Dillon for misleading the Parliament.
ECONOMY

I have written to the Bankers’ Association asking them to put country first. I have asked for a meeting on escalating bank fees. There has been a public outcry on the fees that banks charge to citizens, which is having a negative impact on people.

We will face very shortly a devaluation of the Trinidad and Tobago dollar because of the failure of the Rowley government to manage our economy. They have done nothing for sustainable growth of the economy – tax, tax, tax and borrow, borrow, borrow – not one plan or clue as to what needs to be done to get the money needed to run the country.

Since April of 2016, Finance Minister Colm Imbert indicated that he would look at bank fees, following concerns raised by Independent Senator David Small. In May 2016 – dialogue started between the Central Bank and the Bankers’ Association on bank fees.

That power also resides in Section 3 (3) (d) of the Central Bank Act, which gives the Central Bank the power to… “encourage expansion in the general level of production, trade and employment.”

Jwala says: “The Central Bank Governor needs a refresher course on the broad development mandate of the Central Bank … He also needs to be reminded about “contestability”, which not only gives life to the legislative provisions of Section 3 but gives the Central Bank the ability to influence bank fees..”

For more than one year the Government has sat on this issue.

The small man is suffering while the banks are recording billions of dollars in profits.

The Central Bank in its Financial Stability Report stated that the banking sector in Trinidad and Tobago recorded $4.1 billion in profits before tax. And this increase was driven by increases in dividends, increases in forex sales, income spreads, and increases in fee income and reduced operating expenses – job losses, closing branches.

I have written to the Bankers’ Association, as I said, asking them for a meeting to deal with the issue of bank fees:

“During the past several months there has been a public outcry in protest against the ever-increasing bank charges and service fees charged throughout Trinidad and Tobago. Complaints that these charges and fees are unfair are well documented in media reports and have come from many sectors of society, including businessmen, Chambers of Commerce, Parliamentarians and, as a responsible Opposition, we are committed to encouraging an environment for business success and economic growth. However, while we recognize the role of the financial sector in stimulating business and the economy, we are also aware of the hardships being faced by the business community, in particular small and medium sized enterprises trying to survive these difficult economic times.

In this regard and in pursuit of public policies which will ensure fairness and equity, I seek a meeting with the Association for the purpose of discussing the matter of escalating bank charges and service fees in light of the public outcry that is now evident.”

Let’s do this together – let us put country first.
GOVERNMENT DEBT

The government has increased borrowings at the end of the last fiscal year – was $89 billion.

And we see that revenue has fallen drastically, in spite of the tax they are dropping on you, it shows that you cannot tax yourself into prosperity.

This Rowley government continues to borrow and when we look at the population of Trinidad and Tobago – $89.622 billion debt divided by 378,000 people employed works out to $68,000 that each person working is owing – that is the debt that the government has put on your head.

And they are coming in Parliament on Wednesday to deal with the ANDEAN bill – they say the bill is to become a member of the ANDEAN bank – but Trinidad and Tobago has been a member since 1994.

That is just a subterfuge and a camouflage to disguise the real purpose of the bill to borrow. But I want to ask them what are they going to use this money for? $53 billion has been spent in the past year – but you did not pay the public servants, you did not pay the teachers, or the families of deceased police officers, where has the money gone?

There has never been a more corrupt government than the Rowley-led government. It pains me that the Children’s hospital remains closed.

We have been plunged into an abyss of darkness with this Rowley government.
NGC

The Methanol Company MHTL is suing NGC over breach of contract, but this could have been stopped. Two plants closed – workers losing jobs.

The government did not have to go down this route, but egos playing out at NGC. When you have a Chairman who is on 11 boards, and they cannot get along with people.

I call upon government to explain what happened at NGC that led to these two plants being shut down.

Under of the government we were part of we had the highest number of persons employed ever.

This Rowley government has not created a single new job. Under People’s Partnership Government we created 47,000 new jobs.

Under the government, I led we raised the highest revenue – and we did that with not one new tax was introduced.

We had the highest level of foreign reserves – 11 months of cover. When we left government our macroeconomic fundamentals were very strong. The picture has totally changed since the Rowley government came into power.

Another piece of fake news – Imbertian facts. Finance Minister Colm Imbert said Petrotrin did not pay any tax for the five years of the People’s Partnership.

Don’t come and distort the news and lie to the population and think you will not be found out. All that debt Petrotrin has – do not be fooled – that is as a result of World GTL and other failed projects under the PNM government.

I thank you and invite you to let your voices be heard. I say to the Prime Minister – the only fake news in the country is coming out of the Rowley government.

If you cannot do the job, get out, leave and let those who can, do the job and carry through.” 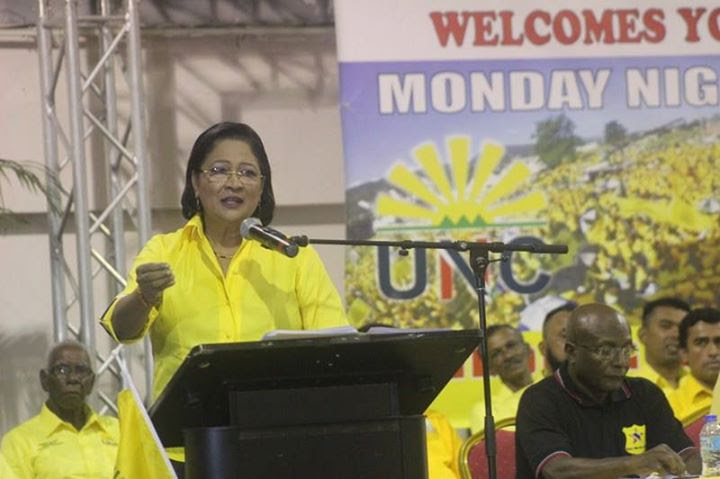