Andrea Parra
0
Spread the word
Opposition Leader, Kamla Persad-Bissessar, has paid glowing tribute to world-renowned poet and Nobel Laureate, Sir Derek Walcott, who died in his native St Lucia on Friday morning at age 87.
The following is Persad-Bissessar’s media statement:
“It was with deep sorrow that I learned of the passing of world renowned poet and Nobel Laureate Sir Derek Walcott.
Born in St Lucia, Sir Derek spent a considerable part of his life in Trinidad and Tobago, after moving to this country in 1953.  He spent many years here as a playwright, theatre and art critic, and founded the Trinidad Theatre Workshop, along with his twin brother, and other internationally acclaimed performers.
He was awarded the Nobel Prize in 1992, and at the time, the prize committee cited him for “a poetic oeuvre of great luminosity, sustained by a historical vision, the outcome of a multicultural commitment.”
Through his poetry and literary works, Sir Derek has served as an inspiring voice of Caribbean people, eloquently portraying the vivid tones and colourful language of people of this region to the world.
His contribution to Caribbean literature is undeniable, and he has left an indelible impact on the global literary community.  For me, I have often returned to Sir Derek’s poetry, and each time I am stirred by his emotive and passionate verses.
On behalf of my family and the members of the Opposition, I extend deepest condolences to the Walcott family.

Sir Derek has left a legacy of living life passionately, and the words of one of his poems is fitting today – “Feast on your life”.

Walcott was regarded by critics as one of the greatest Caribbean poets.

The writer’s collections include In A Green Night: Poems 1948 – 1960 and his epic work, Omeros, which draws on Homer’s Iliad and Odyssey.

He won the Nobel Prize for Literature in 1992 and the TS Eliot Prize for Poetry in 2011.

His winning collection for the TS Eliot Prize, White Egrets, was called “a moving, risk-taking and technically flawless book by a great poet” by the judges.
The Nobel Committee, announcing his prize, said: “His poetry acquires at one and the same time singular lustre and great force… Walcott’s style is melodious and sensitive.”

Born in 1930, he studied at the University of the West Indies in Jamaica, before moving to Trinidad in 1953, where he worked as a theatre and art critic.

He published his first collection, 25 Poems, at the age of 18. He was also an accomplished painter and playwright. 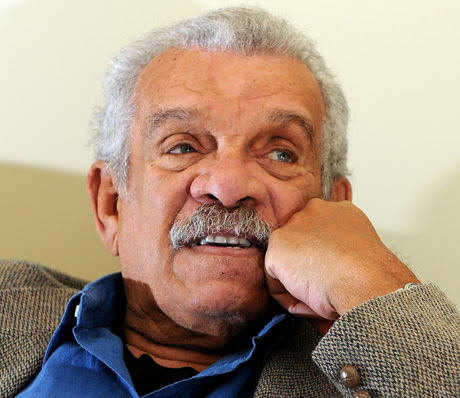