Government to spend $50M on laptops …”FLY BY NIGHT DECISION”

Andrea Parra
0
Spread the word
Former Minister of Education, Dr Tim Gopeesingh, says the decision of the Government to spend $50 million on laptops was a fly-by-night one.
He said when the PNM came into office in 2015, they scrapped the initiative which was in place by the previous PP Government.
Gopeesingh issued the following media release on Wednesday:
“After three years of roundly criticizing the successful computer laptop initiative of the People’s Partnership Administration, the failed Rowley regime is now moving to introduce a slapdash version.
As Opposition Leader, Dr. Keith Rowley said on Wednesday August 12, 2015 that the computer programme “has had no statistically significant impact on students’ performance.”
In typical PNM manner, Dr. Rowley had ignored the tremendous measurable advances and multiplier effect in education generally and in Information Computer Technology (ICT), in particular, as a result of the allocation of 98,000 laptops.
But, in the midst of significant rollbacks in the critical education sector, the Rowley regime is aiming to introduce a hurried and haphazard version, without comprehensive strategic planning.
This fly-by-night and sloppy intervention is taking place after the inept Minister of Education Anthony Garcia repeatedly pilloried the computer programme and botched several other vital and far-reaching developments.
They include scrapping of the homework centres and textbook initiative, termination of the Continuous Assessment Programmes, radical cutbacks in the School Feeding Programme and GATE, and non-construction of primary and secondary schools and Early Childhood Care and Education (ECCE) centres.
The jumbled laptop version being touted by Mr. Garcia follows the termination of the services of all qualified and competent ICT technicians attached to the Ministry of Education.
The clumsy initiative is similar to the Rowley regime’s purchase of the Galleons Passage vessel after the systematic wrecking of the essential inter-island sea bridge.
The Kamla Persad-Bissessar Government had provided laptops to students, teachers, schools supervisors and principals. Teachers were trained in ICT science and schools were outfitted with Audio Visual Rooms and whiteboards.
Computer laboratories were installed at all secondary schools and at 300 primary schools.
More than 200 qualified ICT technologists were employed, and the Ministry of Education partnered with Microsoft, with each laptop being embedded with 18 computer programmes.
Students were afforded the opportunity to take the computers home, which permitted them to utilise the device for their homework, to interact with teachers and to make available to siblings.
It is estimated that as many as 350,000 students benefited from the computers.
Teachers were able to research and to plan their course work on the laptops.
Research indicated that use of the computers significantly improved the learning environment, as Trinidad and Tobago was introducing twenty first century smart classrooms.
The Organisation of American States (OAS) identified T&T as a Virtual Educa Centre, showcasing best practices in ICT, aimed at making a crucial impact on innovation, competitiveness and development in education.
Hundreds more students showed improved performances in CSEC and CAPE; indeed, the overall results in 2014 were the best-ever in Trinidad and Tobago history, and those results were bettered in 2015.
Local teachers won international ICT innovation awards. One educator participated in a conference in Spain which celebrated innovative educators who used ICT in the classroom to transform education.
The cost of each laptop was driven down each year, from $4,400, to $3,800, to $2,800 to $2,200.
The Ministry of Education partnered with international industry leaders, Hewlett Packard and Lenovo. In a hypocritical and deceitful about-face, the Rowley regime is now purchasing laptops from Lenovo, which it had previously denigrated.
The Persad-Bissessar Administration had planned to introduce Android tablets to students of Standards Four and Five and e-textbooks in Language Arts and Mathematics at Form One.
The laptop initiative was a cornerstone of the Government’s strategic programme to transform the education sector, making it as modern, competitive and relevant as that of progressive developed countries.
The barren and incompetent Rowley regime scrapped the programme on the altar of naked political expediency, in the process setting back the education agenda and hurting students’ learning programme.
The muddled programme to place computers at 153 schools is a vie-ki-vie measure by an unpopular regime to seek to gain some ground after three years of gross national mismanagement and ineptitude.
In particular, Mr. Garcia has been a poster boy for backwardness, incompetence and worthlessness.
The questionable computer programme typifies his incompetence.’ 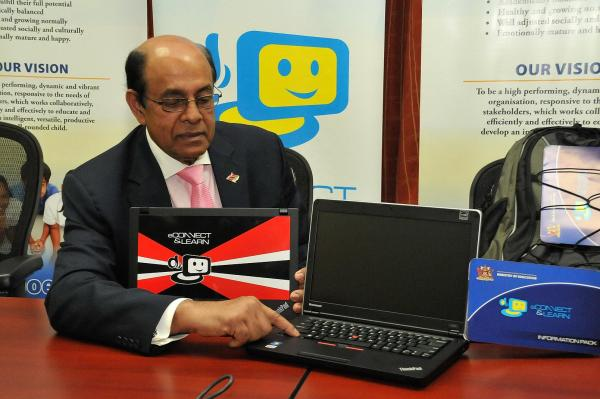