Andrea Parra
0
Spread the word
Three men are dead and another nursing a leg injury after two men stormed a bar and opened fire at Wellington Village, Debe, on Thursday night.
The dead men were identified as Terry Edwards, 34, of Debe, Kevin Fuller, 31, of Palmyra, and Sanjay Mahabir, 42, of Debe.
According to report, around 8.10 pm, two men jumped out of a white car and approached  Runway 69 Shorts Restaurant and Bar at Wellington Road, Debe. Several patrons were outside the bar when the two men whipped out guns and opened fire. They gunmen also entered the bar and fired several shots.

The gunmen calmly got back into the white car which sped away towards the Solomon Hochoy Highway. The Debe Police were contacted and within minutes, road blocks were set up but the killers escaped.
Two persons died on the spot – Fuller and Edwards. Two others were rushed to the San Fernando General Hospital, where Mahabir died. The other man, 19, was shot in the leg.
Thursday night’s shooting took place within a mile of where hairdresser Ria Sookdeo was kidnapped on September 22, 2016. She has never been found.

Based on information gathered, Thursday night’s shooting was linked to a previous killing two years ago. Since that incident, one of the persons killed on Thursday night was constantly threatened, one of his relatives reported.
“They keep threatening him, now look what happened. They made sure to take revenge,” the relative added.
Autopsies will be performed on Friday at the Forensic Sciences Center, Federation Park. No arrests have been made. The murder toll now stands at 91. 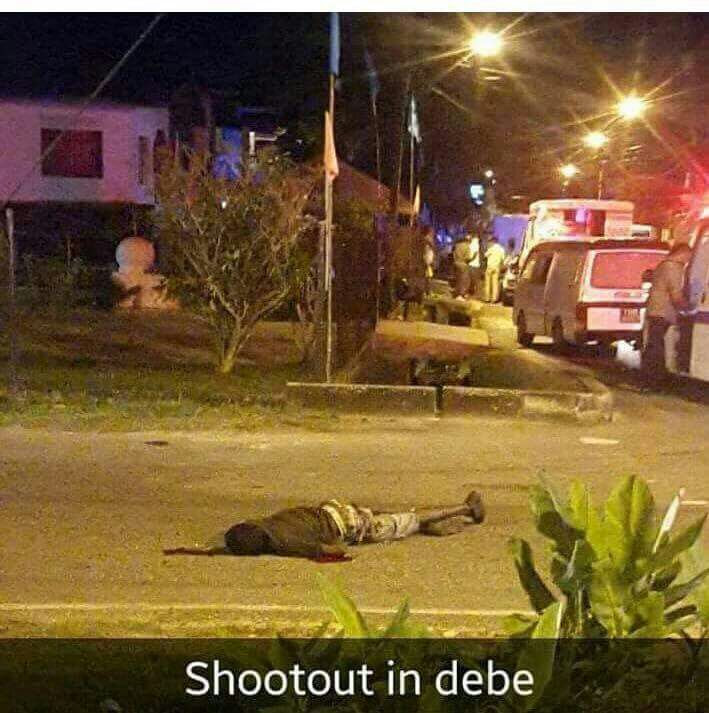 THE MURDER SCENE AT DEBE