Archie goes to open the new law term …”WILL THERE BE A BOYCOTT?

With all the controversy surrounding him, Chief Justice Ivor Archie takes centre stage on Monday when he opens the 2018-2019 law term.

The Law Association has stepped up its investigation into allegations made against Archie, and while there were calls for him to resign, Archie has stood firm.

Word on the ground is that lawyers are planning to boycott the opening ceremony. The numbers have been dwindling for years. Less people turned up at the Trinity Cathedral for the inter-faith service. And fewer persons go to the Hall of Justice for the Chief Justice’s address.

What will happen on Monday? Will there be a boycott? Would Archie talk about the trial and tribulations over the last year? What hope can be bring to the judiciary which is at its lowest ebb since Independence?

Archie, 58, has been Chief Justice for the past ten years.

The past year has been a tur­bu­lent one for Archie. The lat­est chal­lenge to his lead­er­ship oc­curred in Ju­ly when two High Court judges, Jus­tice Frank Seep­er­sad and Jus­tice Car­ol Gob­in, ac­cused Archie of abus­ing his pow­er by is­su­ing a press re­lease via the Ju­di­cia­ry in re­sponse to a pri­vate mat­ter he cur­rent­ly had be­fore the Privy Coun­cil.

Archie’s use of his of­fice in this pri­vate mat­ter has been deemed in­ap­pro­pri­ate and un­ac­cept­able by the judges.

How­ev­er, in re­sponse to con­cerns raised, Archie told the judges that their time would be more pro­duc­tive­ly em­ployed at­tend­ing to their own jobs and al­low­ing him to at­tend to his.

Archie challenged the Law Association which went all the way to the Privy Coun­cil, which ruled against him in August.

This will be the first time that Paula-Mae Weekes will attend the opening as President. Weekes was therefore as a judge.

Weekes re­tired from the Ju­di­cia­ry on Au­gust 31, 2016 at age 56, long before the mandatory retirement age of 65. There are reports that Archie and Weekes did not see eye-to-eye, and she decided to leave the judiciary before time.

It is something to note that Archie tried to go on sabbatical leave to the United States when Weekes was about to the sworn in.

Outgoing President Anthony Carmona turned down the leave and Archie had no choice but to swear in Weekes at the Queen’s Park Savannah. 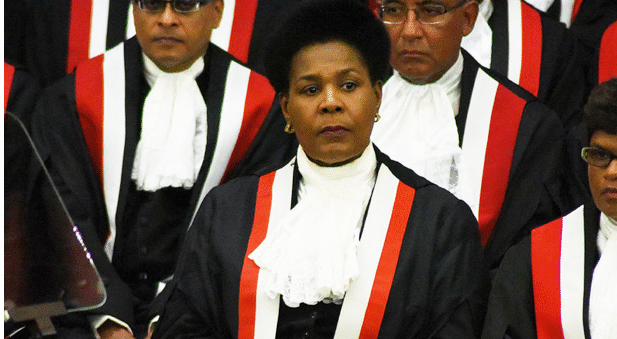 PAULA-MAE WEEKES WHEN SHE WAS A JUDGE