Naresh Boodram, brother of executed killer Dole Chadee, was one of 82 convicted killers who won the right to have their sentences reviewed by the courts.

On Thursday, the Court of Appeal ruled that these 82 killers will have their sentences reviewed by the High Court. His case was the test case and the others will piggy back on this judgment.

Boodram, formerly of Valsayn, was sentenced to death in November 1996 for the murder of two drug dealers, Anthony “Tooks” Greenidge and Stephen “Bulls” Sandy. These murders took place at Spring Village, Curepe, and their mutilated bodies were found in a rice field in Caroni by a farmer.

Chadee was convicted in September 1996 for the murders of four members of a Williamsville family in January 1994. He and eight members of his gang were hanged at the Port-of-Spain Prison in June 1999.

In a 22-page judgment on Thursday, Chief Justice Ivor Archie, Justice Alice Yorke-Soo Hon and Justice Mark Mohammed ruled that High Court judges have a discretion to decide commuted sentences based on the particular circumstances of each case.

Archie, added, “There is no logical reason why the sentence of life imprisonment should be imposed carte blanche upon every person who has their sentence commuted. That is inherently arbitrary and potentially disproportionate.”

He added, “The circumstances of each murder are different and a court properly seized of the relevant facts would be able to substitute the appropriate sentence.”

Central to the judgment was the court’s analysis of the death penalty case of Matthews, which was decided by the Privy Council in 2004.

The 82 inmates had there death sentences commuted to life imprisonment in accordance with the 1993 Pratt and Morgan decision of the Privy Council.

In his judgment, Archie said that the court’s power to decide individual commuted sentences was not affected by the Privy Council’s ruling and is permitted under Section 14 of the Constitution. He said it also fell within the international trend of promoting restorative justice.

Archie added, “In effect, we have kept in place a punishment that does violence to Sections 4 (a) and 5 (2)(b) Constitution, have said that the delay in carrying out executions constitutes cruel and unusual punishment and yet have failed to fully grapple with the obligation to uphold the rights and freedoms enshrined in our Constitution.”

While the Appeal Court ruled in Boodram’s favour, it did not immediately re-sentenced him, instead opting to refer his case and the others for determination before High Court judges.

“A re-sentencing court must ascertain whether the punitive element of the sentence has been satisfied and also whether the appellant (Boodram) has been rehabilitated and is safe for reintegration into society. 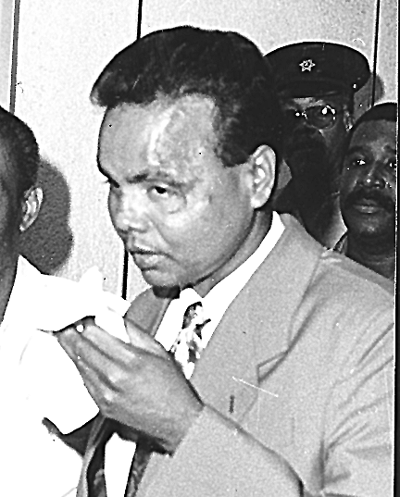 Breaking News
Why Thackoor Boodram was murdered …”JAIL FOR KILLERS”